Lessons Learned?
Gas Chambers to Nuclear Explosions
The Psychology of the Times

I sometimes wonder if the ovens of Auschwitz and the cloud over Nagasaki didn't give us a somber warning about the dangers of human potential. No doubt the immense power of modern weapons and the capacity of a civilized nation to condone hideous atrocities, like those at Auschwitz, caused us to view the awesome complexity of human nature with caution. We learned something about our capacity for inhumanity and ruthlessness. What the Western world learned on the battlefields of two world wars helped teach us compassion, and it gave us a remarkable depth of character. For a moment at least, the world seemed deeply grateful to God for a return to peace on earth, and all over this land there was a sense of genuine humility—but it was short-lived. Graham, Storm Warning, page 164 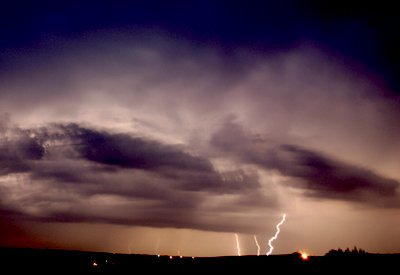 Photo of storm by Mike Hollingshead, copyrighted image used here with permission granted by Mr. Hollingshead and by www.extremeinstability.com.

- What do humans learn from each generation's experience?
- What direction does our thinking take us?
- If life's origins are more than by chance processes, then is it not logical to look into life's purpose as a matter of practicality?
- What purpose is there to this earth-bound life?

You would think the most horrendous events in human history—for example, the mass killings during World War II—would leave an indelible mark on humanity's conscience. Certainly, in the time frame of a post-war era, there is reflection and relaxation. The struggle is over. The world can be a better place. Time to focus on life's purpose and to get it right! Yes?

After World War II's global conflict, humans celebrated life by engaging in material pleasures. But why did we drift from life-centered lessons stemming from global conflict to this material-centric experience? Think of it ... the quality of the social, vibrant living, human experience is not based merely on things, but on qualities of health in both the physical and spiritual realms. And to be good stewards for our planet and its inhabitants is also attending to this overall focus on the physical and spiritual. But then ... what have we made our focus?

By the mid-1950s, America was absorbed with "modernism." From the fins of our automobiles to the shrinking swimsuits of Hollywood models, it was apparent that America was making a deliberate turn toward the new, the modern, the materialistic, and the shocking. The music, the movies, and the media of the day reveal the degree to which this change was taking place in the popular imagination. Graham, Storm Warning, page 164

MOVING ON: MATERIALISM TO PSYCHOLOGY

The post-war era seems a migration—from decade to decade—with distinct themes following in turn. Once comforted in the material sense, the move was to exploring freedom of the mind:

... By the mid-1960s, psychology was the hottest major in American universities. Many of psychology’s insights into the reasons behind human behavior are of value, and some of them confirm what the Bible had said long ago. However, today we can see that some of the founders of that science—likely early astronauts of the mind—were among the leading contributors to the shift in values taking place in American attitudes. Unfortunately, that was not all good news. Graham, Storm Warning, page 165

While popular and widely accepted, this shift is a subtle global change and another significant sign for changes leading to the present global dilemma.

The principle which made secular psychology so radical was that it introduced a break with much that had gone before. Just as the theories of Charles Darwin had undermined belief in God as the Creator, modern psychology also tended to turn people against belief in God. It taught that there was hidden depth and substance within each individual. The outer person was a compromise; the inner person was profound and important. Psychology thus concluded that the true self, buried under a false covering of social conditioning and religious prejudice, was struggling to be set free. For some psychologists, therefore, religion was seen as a hindrance rather than a help to human personality. Graham, Storm Warning, page 165

Dr. Graham notes that in recent times new forms of Bible-based psychology have been developed to deal with emotional issues in the context of faith and belief. However, aside from faith-based counseling, even with psychological principles being applied, the more common secular counseling defines a different picture.

Much modern secular psychology, on the other hand, preaches individual self-interest as the ultimate reality at the expense of compassion, concern for others, and devotion to a higher purpose in life—as in our relation to God and our fellow man. "Pop psychology" has contributed in no small way to the chaos of hedonism, secularism, and nihilism in the modern culture. Graham, Storm Warning, page 165

The move to psychology taught us that answers are merely found in the self:

From high school on, young people are indoctrinated with the secular definitions of self-esteem, self-image, self-realization, and self-actualization propagated by the prophets of selfism. Today the ideas and principles of Carl Jung, Alfred Adler, Carl Rogers, Abraham Maslow, Gordon Allport, Erich Fromm, and not least, Sigmund Freud, are better known on college and university campuses than those of Moses, Samuel, Isaiah, Jesus, or Paul.

The focus on self, auto-centrism, and it behaviorism has led our society into a fascination with pleasure, emotional and sexual stimulation, and "personal fulfillment." What Freud described as the liberation of the id was the first step toward the cult of the self. Graham, Storm Warning, page 166

But lets pit self-reliance and self-interest against the very real need to counter negative global changes and a very complex picture surfaces. For the moment, we are not thinking of climate change, extinction, consumerism, or even booming population, but now to changes extending into the psychological fabric of family and community.

From the gloom of a world war—exhibiting the most inhuman madness and demonic behaviors of the Nazi war machine and the potential for global nuclear annihilation—we come to another pit of human existence. Here is the root of thought and behavior which at first seems to have little to do with war, global tensions, or the obvious evidence of global crisis. Yet from another vantage point, one sees we've come to accept living in a pit of psychological crisis as normalcy:

Who stands for truth? Does anybody care anymore? At the bitter end of an era of liberation—women's lib, kids' lib, animal lib, and everything-but-ethics lib—America has apparently been liberated from its moral foundations. But for too many, the good life has become a living hell. Graham, Storm Warning, page 170

And in that hellish state some get a glimpse of truth.

Long ago reflections from the book of Ecclesiastes tell us cycles are an inherent part of living, in nature and generation to generation, and nothing is new under the sun.

4 One generation passes away, and another generation comes; But the earth abides forever. 5 The sun also rises, and the sun goes down, And hastens to the place where it arose. 6 The wind goes toward the south, And turns around to the north; The wind whirls about continually, And comes again on its circuit. 7 All the rivers run into the sea, Yet the sea is not full; To the place from which the rivers come, There they return again. 8 All things are full of labor; Man cannot express it. The eye is not satisfied with seeing, Nor the ear filled with hearing. 9 That which has been is what will be, That which is done is what will be done, And there is nothing new under the sun. (Ecclesiastes 1: 4-9; NKJV)

To unlearn war would be new! Yet, no where on the time line do we see a pivotal point where humanity learns to never have another war. Such a change only comes as a future oriented biblical promise:

He shall judge between the nations, And rebuke many people; They shall beat their swords into plowshares, And their spears into pruning hooks; Nation shall not lift up sword against nation, Neither shall they learn war anymore. (Isaiah 2:4; NKJV)

For now, conflicts populate history at every twist and turn. For now, what is learned is how to employ greater killing power and more effective tools of destruction. This is nothing new under the sun. So what is the lesson learned?

What might we think individually, apart from the repetitions brought by human behavior throughout history? Dr. Graham would offer you another mind, other avenues of hope, and answers that step into the eternal realm. Consider that life's purpose is thus a choice. If you've explored the WindowView, you may see something incredibly rational and sane behind his perspective and view on the world, from the post World War II era to the present day.

Dr. Graham's crusades move into communities to ask people to come out, to hear, to consider the eternal promises made long ago, recorded in Scripture and brought to life with a familiar face and soft spoken voice. And what Dr. Graham does is pray for those who stand there, for standing there is what makes the difference, the prayer simply acknowledges the act of making a commitment. Again, its a decision made by those who come forth, the Reverend has only helped make the opportunity. Stepping forward is a step into the eternal that extends well beyond the end of the WindowView timeline.

The importance to global change is in looking at how social, biological, and physical sciences all reveal data and signs for more ominous changes in the near future. This is change in every aspect of human and earthly affairs ... globally. The Window looks further to see change as a backdrop to a biblical timeline. Driving forces for change force us to ask the most important questions about our true origin, who we are, why we are here, and what the Scriptures tell us about the future. Change forces us to look deeper to face choice or crisis. Life is an opportunity to look for the answers.

Billy Graham is well known the world over for his work in spreading the biblical message of salvation.(www.billygraham.org)

Please Note! We are presenting a number of quotations in the "Signs of the Times" series that are taken from their original context. So Be Aware ... the impact of these statements is only heightened and intensified by a reading of the original text cited below. WindowView serves to reflect many original sources and in this case we highly recommend a reading of the entire book used as a source here! The 'Signs' are woefully important to revealing humanity's future, reading these quotations in their original context makes this point all the more clear!

For the newer edition that is currently more available ...

For a general listing of books, visit the WindowView Book Page for: Science and Scripture .
Step Up To Life

Time spent looking ... through a window on life and choice ... brings the opportunity to see in a new light. The offer for you to Step Up To Life is presented on many of the web pages at WindowView. Without further explanation we offer you the steps here ... knowing that depending on what you have seen or may yet explore in the window ... these steps will be the most important of your life ...