Tension Over Time — Science to Scripture

Change Sweeps the Globe & Storm Clouds Gather on the Horizon

This article is a sign post bearing a warning. It's part of a series on 'storm warnings' that are described by Dr. Graham in a book by the same name (see reference below). We might ask about current conditions on earth. What is happening here? Perhaps you can detect a certain tension building along time.

How much more do we need to learn? Scientists today gather data by the ream and terabyte. Much of this details the depths to which we probe and explore—so much information to describe such an incredible universe. We've been recording and reacting to this earthly platform in space ever since the human mind expressed its response to being here.

Since men first scratched out their rough drawings on hides or papyrus or, and as at Altamira and Aurignac, on the walls of caves, they celebrated the beauty and wonder of God's creation—even if they did not know it. The world created by God was perfectly designed for human life, with food and game, sparkling mountain streams, and every pleasant thing. It was made to order by a loving God for the enjoyment of the only living beings made in His own image, the man Adam and the woman Eve. Graham, Storm Warning, page 132 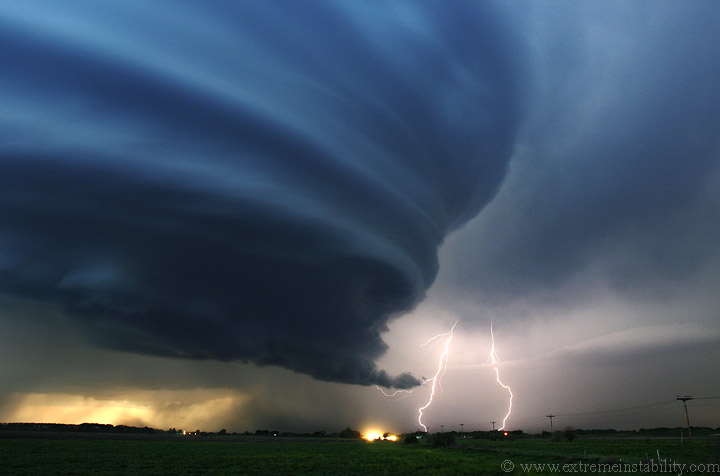 Photo of storm by Mike Hollingshead, copyrighted image used here with permission granted by Mr. Hollingshead and by www.extremeinstability.com.

And yet today we live in a world with immense and constant changes that risk crisis—to the point we ask: Are we not getting better, closer to peace, prosperity, and paradise on earth? What if the opposite is true and are we really witnesses to global decline and a fading planet home?

There are warning signs all around us. Do you see them? And if you do, are you responding? Is anyone really responding? If not by any significant means, then do changes brew into storms approaching on the horizon?

Answers come along WindowView's time lines that are geared to revealing trends that describe humanity's future in terms of scriptural and scientific issues. Both together provide a synergy that, practically speaking, demonstrates the direction we are headed—right now!

Where is humanity headed?

So, what ever happened to paradise? If we start with the biblical setting, with Earth as the stage for life's story, we see a Creator creating and a people initiated as part of His initial work. But due to a short fall through sin—yes, it's the classical story of the Garden—we see humanity expelled to the wilds of the earth at large. It's a good beginning in what is created, for it's proclaimed so by the Creator, but not a good beginning by humanity through a loss that so many of us have yet to reconcile on a personal basis. Our birth right comes with a confrontation—that is, the human sin condition—and denial does not make it go away. The storm warnings give the detail as to how extensive this human problem has become in the world today. All the while, the evidence for the Creator's existence is as plain as the intricate relationships that made the Earth a viable home to life.

"In the beginning God created the heavens and the earth" (Genesis 1:1). By His very nature, God creates. He is the Creator, and we discover the essence of Who God is in His creation. We see Him everywhere in it. The apostle Paul said, "For since the creation of the world His invisible attributes are clearly seen, being understood by the things that are made, even His eternal power and Godhead" (Romans 1:20 NKJV). If we know anything about His creation, we know something of God. For creating is what God does.

... The world around us abounds with wonders. David, the psalmist, sang, "The heavens declare the glory of God; And the firmament shows His handiwork " (Psalms 19:1 NKJV). Graham, Storm Warning, page 131

We've been living here—generation to generation—for what seems like such a long time. And yes, we marvel at the immediate experience to life. But there's another fascinating appreciation to grasp. Do we see it? We are not here by chance, but instead, by design! [The WindowView Science Area includes discussions on evidence related to design in the universe, for example: astronomy, intelligent design, complexity, and even in the structure of plant and animal cells.]

Interestingly, the earth is a place where natural processes have brought together resources for our present day life. By one calculation made by Dr. Hugh Ross, human habitation could only occur (at present optimal conditions) within a window of about 41,000 years. Of all planets, or all solar systems, of any galaxy, a window to life depends on so many factors and so many resources.

And human life only fits—lives, thrives, dwells—within a brief window of time. No time before, nor after this window, is as optimal as now! Life has no infinite potential—as some may posit. We fool ourselves in thinking so—just because the universe seemed endless and infinite in all dimensions. But, truth be told, our time now is like at the apex of the universe's prime time. And beyond, with accelerating expansion over time, the universe is destined to grow cold and dark.

So, think about it, if coal and oil deposits or iron ore formation had not occurred over geologic time, the non-renewable resources we enjoy (but consume so rapidly) today, the window we now live in would not be. The development of an atmosphere and building of soils by weathering processes, and so many other factors that dress this place for life, all assemble the window to frame life in this time. And we too often attribute this merely to nature. When in fact, nature's qualities rest on so many factors (see astronomy) supported from the initial conditions at the root of the big bang event itself.

Step back to the moment before the bang and we are face to face with the ultimate reality of creation. An Intelligent Designer put these conditions in place, just as indeed we find ourselves in an environment with parallel examples of design of our own making. This too is a reflection of the Creator.

It is sad and ironic that two centuries of scientific and technological achievements seem to have convinced humanity that God has no part in the creation. Through study and genius, the greatest minds who have ever lived have touched the very edges of God's creation, and some have apparently decided there is no God. I think of a child so absorbed with his paper airplane that he is oblivious to the 747 taking him around the world. Graham, Storm Warning, page 133

While looking out this window you will recognize the need for a greater appreciation for where we are—our existence. Science does not provide all the answers nor all the solutions.

The biblical and scriptural elements that run through history into the current headlines are also part of reality. Put together, these avenues of information bring us to a broader view. And that vantage point in fact tells us where we are headed, whether we like what we see or not.

The kicker to the human story follows steps that bring us to face reality in 'uncommon' terms:

These are the elements that begin to appear along the WindowView timeline. Note the trend over time. Scientific advances are not enough to solve the human dilemma. And if you think science provides evidence that excuses the Creator's presence from the present scenario, think again—review the evidence and issues on origins presented in the WindowView Science Area.

Global changes are a matrix of relationships rooted in the perplexing array of humanity's circumstances. The problems that are illustrated in the related 'storm warning' articles clearly decry something has gone wrong. The human potential seems ever for the good, but just the same, where are we headed?

Storm warnings and signs of the times appear in the latter portions of the WindowView time lines. As time goes on, there is an ever increasing tension between the biblical and technological worlds. Conflict in the Middle East, scientific data continuing to detail change all around the globe, scientists still expressing concern for achieving a sustainable planet, but all the while we still see decline. This describes a tension that brings humanity to a crossroads of crisis or choice.

The importance to global change is in looking at how social, biological, and physical sciences all reveal data and signs for more ominous changes in the near future. This is change in every aspect of human and earthly affairs ... globally. The Window looks further to see change as a backdrop to a biblical timeline. Driving forces for change force us to ask the most important questions about our true origin, who we are, why we are here, and what the Scriptures tell us about the future. Change forces us to look deeper to face choice or crisis. Life is an opportunity to look for the answers.

Billy Graham is well known the world over for his work in spreading the biblical message of salvation.(www.billygraham.org)

Please Note! We are presenting a number of quotations in the "Signs of the Times" series that are taken from their original context. So Be Aware ... the impact of these statements is only heightened and intensified by a reading of the original text cited below. WindowView serves to reflect many original sources and in this case we highly recommend a reading of the entire book used as a source here! The 'Signs' are woefully important to revealing humanity's future, reading these quotations in their original context makes this point all the more clear!

For the newer edition that is currently more available ...

For a general listing of books, visit the WindowView Book Page for: Science and Scripture .
Step Up To Life

Time spent looking ... through a window on life and choice ... brings the opportunity to see in a new light. The offer for you to Step Up To Life is presented on many of the web pages at WindowView. Without further explanation we offer you the steps here ... knowing that depending on what you have seen or may yet explore in the window ... these steps will be the most important of your life ...